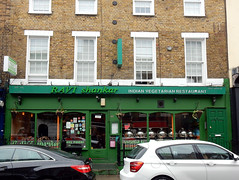 This place has been around a while and lies on a street with many other South Indian vegetarian restaurants, though it has a slightly more polished frontage than some of the others. In the evenings it can get busy, but they are usually able to fit people in (on Ewan's March 2008 visit, we were able to be seated on a Friday evening).

Service is brisk like most of these places, and the menu specialises in dosas, some of which can fairly tower over one's plate. The overall price is a little more expensive than its neighbour, the Diwana, but still good value.

On Ewan's March 2008 visit, the Mysore masala dosa was long and thin, lying across the plate, but very tasty. As starter we had the dahi vada (lentil balls with a sauce), a cold dish but a nice one, even if the balls were somewhat doused in the yoghurty sauce.

itsbruce visited with some friends in November 2008; service was prompt, the Bhel Poori and Potato Poori starters were crisply flavoured, the Mysore masala dosa really was very long, and the thalis were excellent. Several of those present had dined at Chutneys, just up the road, and all agreed that this was better, even if the menu appears shorter at first glance.

Bec and friends visited on a Saturday afternoon in August 2010. The buffet (£7) had a massive selection and was very tasty indeed. Will definitely return.

Kake visited on a Thursday lunchtime in May 2015. There were four other customers in when I arrived a little before 12:15pm, and by 12:30pm their numbers had grown to around a dozen. No music was playing. A large glass of tap water was brought without my having to ask. Everyone except me was having the all-you-can-eat buffet, but I went for a light snack of bhel puri (£3.70) photo. It was OK, but rather one-dimensional. The texture was all fried crunchiness, unrelieved by the sparse, tiny cubes of boiled potato and raw onion. The flavour was suitably tamarind-sour, but less complex than renditions I've had elsewhere. The plate it was served on was slightly too small, spilling some of the liquid on the table. No service charge was added to the bill. Indeed, there was no physical bill at all — the staff member just told me how much to pay.

Accessibility: Two large steps to get in. Toilets are down a flight of stairs.