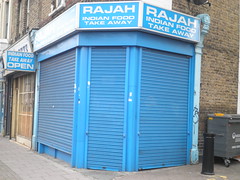 secretlondon ordered from here one weekday evening in January 2009. I had a vegetable thali (£10) which consisted of chana masala, tarka dall, mushroom bhaji, pilau rice, naan and raita. I also had a kebab roll starter (£2.60).

The kebab roll was basic - an indian kebab in a bread, with no salad or sauce. It was fine and edible though. The thali wasn't. The tarka dall tasted only of tumeric, the mushrooms didn't taste of much and the chickpeas were the only one I finished but still wasn't good. I won't order from here again.