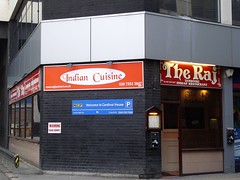 Now closed; used to be a curry house pretty much directly opposite Farringdon Station. As of April 2009, the interior has been gutted, and there are no indications of what (if anything) will happen to the site.

A curry house pretty much directly opposite Farringdon Station, so terribly convenient if you need to grab a bite to eat before going home after an evening out in any of the decent pubs in the area.

DrHyde remembers it as being very good in the past, several years ago. Unfortunately, on my recent visit it became apparent that standards have slipped. It's obviously under the same management because the layout is the same and even some of the staff are. So either they've cut costs, or the kitchen staff have changed, or possibly I've got used to better curries.

Anyway, none of that is to say that it's *bad*, just that I can't recommend it as a destination in itself. For a post-pub curry though, it's still OK. The only really specific gripe I can put a finger on was that the poppadums weren't very fresh, everything else is just... not *quite* good enough.