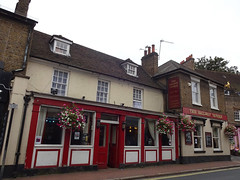 Pub in Bexley, very near the station.

It's quite a traditional sort of pub, with a worn carpet on the floor, long red velvet curtains held back with twisted cords, and a wrought-iron gantry above the bar. A small raised dais in one corner plays host to an open mic session every second Wednesday (according to a sign seen in September 2016). There's some sort of beer garden out the back.

Kake visited on a Tuesday afternoon in September 2016. There were eight or nine other customers in when I arrived around 4:15pm, mostly young men clustered around the bar, and seemingly locals rather than commuters. There was plenty of lively (even boisterous) conversation going on, competing with the loud pop music playing on the speakers.

There were two real ales on from the local Bexley Brewery: Golden Acre and Howbury 5. A pint of lime and soda was a pleasingly-cheap 50p.

According to the 2011 Good Beer Guide, there's karaoke on Tuesdays, poker league on Thursdays, and live music on Fridays and Sundays; also, families and dogs (on leads) are welcome; also also, there's free wifi and no food.

Accessibility: No steps in, but there's a couple of small ridges at the threshold, making it somewhat uneven. Much of the seating is on high stools. No steps to toilets.