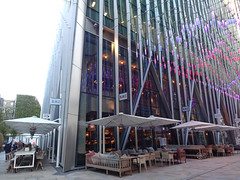 Cafe/bar/restaurant in Victoria, part of a small chain.

It's a large space, located on a private plaza at the base of a new-build mixed-use development near Victoria Station. Inside, though, it's divided into separate areas so doesn't feel too echoing. They've made some effort to conceal the glass-and-steel of the actual building, with a "corrugated iron" false ceiling along with a porch-like railing set just inside the floor-to-ceiling windows.

The tables are marble-topped, and the seating is a mixture of padded banquettes and mismatched wooden chairs. Macrame and basketwork lampshades near the front give way to old-fashioned glass lanterns along the back wall. There's a bar in the centre, surrounded by tall stools, and an open kitchen off to one side. Even more seating is available on the first floor.

Kake visited on a Monday morning in November 2017. There was only one other customer when I arrived around 8:15am, but a couple more turned up while I was there. Music was playing, not too loud, but perhaps a little perky for the time of day.

The courgette and mint fritters promised by the menu on their website were absent from the breakfast menu in the actual restaurant photo, so instead I went for the avocado and chard eggs florentine (£11) photo.

Overall, it was pretty good, though unfortunately served on a cold plate so lost its heat very quickly. The eggs were fine, though inconsistent; one had a slightly runny white, while the other had a yolk that had begun to set around the edges. The muffin was sturdy enough to hold up to it all (almost to the point where I wished for a serrated knife) and had a good flavour. The substitution of chard for the usual spinach was a pretty good idea, and it was well-executed, too, cooked just enough to soften it while leaving some bite. The hollandaise was also well-executed, and the toasted buckwheat and pumpkin seeds sprinkled on top added flavour as well as contrast of texture.

Tea was loose-leaf, but came with a separate tea strainer rather than one inside the pot, meaning I had to drink it quickly to avoid over-steeping. It was also rather overpriced at £3.20 for a pot that was almost exactly the same size as the cup.

Service was generally fine, though it wasn't always particularly easy to get the staff's attention, and they erroneously told us that there was no step-free access to the toilets. A 12.5% service charge was auto-added to the bill.

Kake's verdict: The menu is pretty interesting, and I'd like to come back and try their full veggie breakfast, but the service issues are a little worrying.

Accessibility: No steps to get in. The toilets are on the first floor, up a long staircase, and on our visit we were told that there was no alternative but to use the stairs; however, according to an email from the Rail House Cafe management (January 2017) there is a lift somewhere. We haven't yet confirmed in person that this lift provides full step-free access.