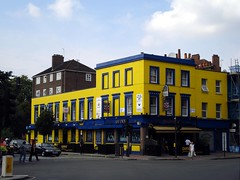 Pub in Kentish Town, just by the Camden Town borders. It was in the 2007 and 2008 Good Beer Guides (though not the 2009 one), which is a little odd as CAMRA tends to focus on real ales and you won't find much of that at Quinn's. What you will find, though, is a vast selection of continental beers, around 50 different ones. The ones tried on pfig's early 2007 visit were in excellent condition and properly dealt with and served. It is a big pub, so space is not an issue.

The downside is that this is probably the tackiest pub you'll ever go into: there is no apparent consistent element of decoration, the sofas are bright red velvet and they seem to have picked the worst music published in the 80s to play.

With this in mind, it's definitely worth a visit if you're into continental beers and don't care about the decoration. It also provides an oasis of relative calm to escape from the bustle of Camden outside.

On a visit in 2012 on a Saturday night there were two banks of hand pumps, about 6 in each, but only 3 were on - one cider, Abbot Ale and one other bitter. At least 5 draught lagers were available (San Miguel, Budvar, Kronenburg 1664, Fosters and Carling), along with Guinness (regular and extra cold). There were (at least) 2 large screen TVs; one was showing Spanish football, the other the game show The Million Pound Drop, but no customers seemed to paying attention to either. Around 9pm it was fairly empty, with plenty of choice of seating, but was filling up about an hour later. However both conversation and music were quiet enough that it was possible to have conversations without straining.

Toilets are downstairs, and at the time of our visit possibly slightly treacherous for those unsteady on their feet, as in the gents a drain cover in the centre of the floor had sunk down by a few centimetres, ready to trip the unwary.

Not sure about food times (Time Out lists the food times as the pub opening hours), but when Kake visited on a Sunday afternoon in September 2007 (around 4:30pm) they were doing Sunday lunch from the carvery only. When Nick visited on a Saturday in 2012 the menu on the wall suggested a choice of items at a £6 fixed price, but he didn't spot serving times.

Ewan comments: I really enjoyed the selection of beers here when I visited in early 2007, and the staff were clearly very knowledgeable. There were still lots of very interesting beers on a January 2010 visit.