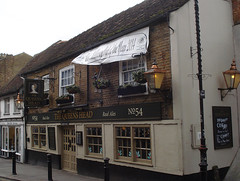 The ceiling is low, with exposed beams and a "mind your head" sign. Worn varnished floorboards are underfoot; chairs and banquettes are wooden with upholstered seats. Seats are fairly crammed into the front area; mostly banquettes and normal-height chairs and tables, though there's also a few high chairs clustered around a high table. Further in is standing room and a couple more high tables, and right at the back there's a separate little room with more chairs and tables and a flatscreen.

Kake and bob visited on a Saturday lunchtime in September 2012. There were four real ales on — Black Sheep Bitter, Wadworth 6X (£2.85/pint), Adnams Broadside, Young's Bitter — and Thwaites Wainwright was marked as "coming soon". They also had Old Rosie cider on handpull. A pint of lime and soda was a pleasingly cheap 58p.

There were eight or nine other customers in at 12:15pm, a couple of them having an early lunch. Music was playing, fairly quietly; vintage jazz/blues.

According to their website as of September 2012, food is served noon-8pm Mon-Fri and noon-5pm Sat-Sun, from a chain-wide menu.

Free wifi is available via The Cloud (you have to register a free Cloud account for this, but the form happily accepts junk data); it worked fine when tested in September 2012.

Kake's verdict: I'm not entirely sure how much my impression was coloured by my previous knowledge that it was part of a chain, but despite the obvious age of the building I did get a bit of a chain "feel" from the place, mainly due to the promotional literature on the tables. In general, not a bad pub, though the strong smell of wee in the ladies' was very offputting.

Accessibility: A very small step to get in (but downwards, so not immediately obvious). There's a ramp/sloping floor in the middle of the pub. Level access to bar, seating area, and toilets once you're in.