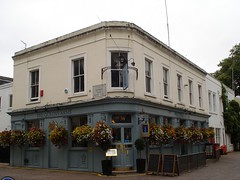 Pub in South Kensington, near the Royal Albert Hall, one of the Castle pubs run by Mitchells & Butlers. It's tucked away on a mews, and slightly tricky to find if you don't know what you're aiming for.

It's quite cosy inside - exposed floorboards, lots of dark wood, chandelier-style lighting, burgundy paint, etc - not in a gastropub way though. In the daytime there's a reasonable amount of natural light; on Kake's October 2008 visit it was a bit dimmer once it was dusk outside, since they didn't turn the lighting up to compensate, but it was still just about possible to read a book.

Palfrey and friends visited on a Wednesday evening in September 2008. There was a good range of beers on tap, including three different wheat beers (Erdinger, Schneider Weisse, and Applebocq). Cost was about £3-something per pint, can't remember precisely, but seemed reasonable for the choices and area. They also have real ale on handpumps - on Kake's October 2008 visit the choices were London Pride (£2.80/pint) and Deuchars IPA, and other interesting options were Aspalls cider on tap and Liefmanns kriek in bottles in the fridge.

On Palfrey's visit, service was helpful and rapid up until about 30-40 people apparently from a local conference descended on the pub a bit later and then it got somewhat insane. Given the proximity to Imperial College, this may not be an uncommon experience. Reports from others (work colleagues) back this up, but also that their experiences of the pub is generally very good otherwise.

Food is served noon-10pm Monday to Saturday, and noon-9:30pm on Sunday. Palfrey had one of their burgers (with bacon and cheese, side of chips), definitely recommended, was ~7 quid I think.

Accessibility: There's a step up to get in at the front entrance, but there's another entrance round the side that has a shallow ramp instead. There's also an accessible toilet.