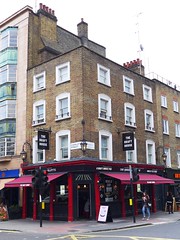 BrewDog pub on the corner of Goodge Street and Charlotte Street in Fitzrovia.

Externally, this is an extremely pretty little pub building with minimal but tastefully chosen colours, and the names of hop varieties in the windows. Inside, the old partitions have been stripped away to leave a single rectangular room with the bar to the rear photo. There are perhaps ten or so small tables with wooden pew-like banquettes along the walls and small stools. There are also benches attached to the outside of the pub (but no tables), making the best use of such a tiny space. There is no other drinking area, meaning that on weekday evenings it can get extremely busy (and loud), though it's more pleasant outside the peak hours and on Saturdays.

The wooden bar retains its traditional Victorian solidity and has three handpulls for ale (always changing, though they've had Sambrook's Wandle available on most of Ewan's visits) and an array of keg taps which also feature plenty of guests. Fridges mounted on the wall behind the bar have an array of beers from around the world, mostly sourced from smaller breweries, with a particularly good selection of US craft beers. There are also some ciders, wines and premium spirits available.

Food is served noon-3pm on weekdays and noon-5pm on Saturdays, though pork pies and scratchings are available outside those hours. The menu focuses on their three high-quality burgers common across all the chain's sites, though with some other options.

Ewan's opinion: I work in the area and would generally avoid this pub after work at peak hours, and it's certainly not a good venue for meeting friends if you want to find a seat, unless at off-peak times. That said, the beer selection is nicely curated with a good range, particularly on keg and bottles, and the service has always been very friendly, especially at their semi-regular meet the brewer "Sunday Sessions", which sell out very quickly but offer inspired beer and food pairings.

Kat's verdict: On my 3.30pm weekday visit it was almost empty, but by 5.01pm it was difficult to even reach the bar, let alone get served in a timely fashion. Otherwise, very pleasant.

Accessibility: A low step to get in. Toilets are down a flight of stairs with a handrail on one side.