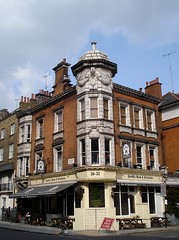 Pub near Regents Park, serving tapas all day plus gastropub food at lunchtimes and evenings.

The decor is shabby-chic standard-gastro photo. Tables are laid for service downstairs, and there's also a couch area to the left of the front entrance. Behind the island bar is a small, thin beer garden with some couches as well as tables with cover. There are also tables outside on the street, on both sides of the pub.

Kake visited on a Monday afternoon in April 2009. It was empty when I arrived a little after 4pm, but when I left an hour later there were a couple of dozen people in despite it being right at the start of the week. Music was playing — reggae, Pink Floyd, instrumental jazz — though not too loud.

Beers available were Adnam's Bitter (£1.40/half) and Marston Pedigree. They have a range of standard and premium lagers, including Lowenbrau (£1.60/half), though the main focus is on the fairly lengthy wine list (two sides of a laminated A4 page).

They do gastropub-type food photo of menu as of April 2009 at lunchtimes and evenings (and there's a restaurant upstairs if you don't want to eat in the pub part), plus tapas all day photo of tapas menu. Food is served 12:30pm-3:30pm and 6:30pm-10:30pm Monday to Friday, and 12:30pm-10pm Saturday and Sunday.

In April 2009, Kake tried the paprika pork belly skewers (£4) photo; these were fine, fairly moist, and tasty enough, with a reasonable tahini sauce on the side. The staff had no problem with me ordering just a single item, which suggests this might be a good stop for a tapas crawl.

In June 2009, Ewan tried the mixed tapas plate (£8.50 for vegetarian only, £12.50 including cured meats) photo. It was a reasonable selection, served with some rather nice toasted flatbread, and included a decent hummous and a rather less interesting baba ganoush (lacking the full smoky aubergine flavour of a really good baba ganoush), a couple of stuffed vine leaves, grilled courgettes, marinated wild mushrooms, cannellini bean salad, and some lettuce leaves. In all, it was a large and reasonable selection for the price.

Kake's verdict: I'd come back. The Food And Drink In London review linked below recommends their soupe de poisson, and I do hope it's on the menu next time I come here. I also note that their website advertises a cocktail menu including amaretto sour, which I'm keen to try as I've never had one in a bar as good as the ones I make myself.