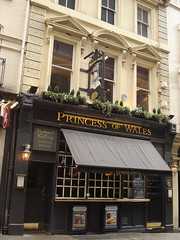 A busy tourist pub which is nevertheless pretty decent, by Charing Cross and Embankment stations.

This place is generally fairly packed downstairs, given its placement along a busy pedestrian street linking the River Thames with the Strand. However, there's also an upstairs room (billed as a dining room), with access via stairs from the street as well as from the back of the downstairs, where on a Sunday evening in January 2009, we were able to seat our 20-person group of walkers, with a little bit of squashing. (Unfortunately, their heating was broken that evening.)

They have a decent pub menu, which is long on sausages (including a vegetarian option), as well as offering other standard options (burgers, fish & chips, pies, and the like). Ewan's large vegetarian sausages and mash (£9) was reasonable, with five fat sausages resting on some tasty mash, with enough but not too much gravy. Some of my friends were having the pies (around £7), which were properly encased in shortcrust pastry, and looked good also.

There are several ales available on handpull, including London Pride, Spitfire and Landlord as regulars, and a rotating guest ale as well. They also have the usual lagers on draught, as well as a reasonable wine list, with perfectly drinkable bottles of red wine starting around £7.