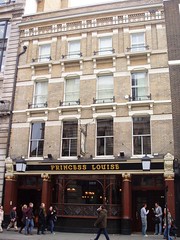 Samuel Smith's pub in Holborn. Refurbished during 2007, reopened in January 2008.

The restorers have paid careful attention to the Victorian period detail in the Princess Louise, and have resurrected all the glass panelling downstairs, creating multiple 'compartments' around the bar, with a passage running around either side and a larger space towards the rear. The compartments seem to all have bar stools; the only proper seats are in the back area and the area at the front between the two entrances.

As well as the ground floor seating areas, there's an upstairs room which is laid out with tables and chairs (and some sofas), with a small bar at the back and a sophisticated gentleman's club ambiance (minus the cigars and brandy). Until, that is, the office workers pour in around 6pm and the place becomes a heaving, noisy mass of drinkers.

This place is, in fact, one of the busiest places you could hope to come, so get in early for a seat upstairs. It also attracts its share of masons from the nearby Grand Lodge. When secretlondon visited on a Friday evening in October 2008, the inside was entirely full and the only place with room was on the street, with the entire pavement becoming a 'beer garden' of sorts. However, as of August 2011 there are signs up stating that drinks are not allowed outside between certain hours.

Ewan and friends visited in February 2008, and tried some options from the small and fairly standard selection of food (steaks, burgers, pies and baguettes). The only vegetarian options were vegetarian pie, macaroni cheese, and cheese & tomato baguette. Spiral fries were a perfectly good snack (though pricy, at £3.50). The vegetarian pie was better value at £6, and was tasty but nothing special, with good mash but fairly flavourless vegetables (carrots and peas).

As is usual for Sam Smith's pubs, all the drinks are from their own range. However, they do have Old Brewery Bitter on handpump (as of July 2008, this was either 92p or 93p for a half — not sure which, as there was some confusion over change). In August 2011, Cider Reserve was £1.65/half.

The toilets are down a flight of stairs at the back. The gents' are pristine and quite dramatic, with vast urinals; the ladies' are much less interesting. The doors to the toilets take some decoding as the 'Gents' and 'Ladies' are written in the stained-glass doors, and not easy to spot.

Accessibility: Toilets downstairs, as mentioned above — handrail most but not all of the way down. Didn't spot any accessible toilets. Shallow step at entrance, no other steps on ground floor, narrow interior passageways and doorways.