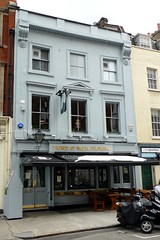 A pub just by Warren Street Station. It's part of the Mitchells & Butlers Castle sub-chain.

Fully refurbished around mid-2010 and brought into the Castle brand (later subsumed under Metro Professionals), there are two spaces, downstairs and upstairs. The upstairs room ("the Orangery") can be booked for functions but is available for seating if not booked. The downstairs stretches back fairly far, with polished wooden floors, and spot lighting picking out pools of light in the otherwise dimly lit interior. There are a range of tables of varying sizes, and the website advertises table service is available (with no additional service charge applied).

On Ewan's Tuesday lunchtime visit, there were a few people in, but the place was hardly busy (undoubtedly, given its location near a station, it fills up after work). Service was friendly and food arrived promptly. The bar has a range of handpulls for ales (including Sambrook's Wandle and two or three others) as well as a wide range of lagers and ciders. Beers on draught included Sierra Nevada and Brooklyn Lager.

Food is served 8am-10pm Monday to Friday, and 10am-10pm Saturday and Sunday. The food menu covers a range of options (fish, meat and vegetarian), and there is also a separate pudding menu (though several of them were not available on my visit). Ewan tried the salmon and smoked trout fishcakes with horseradish crème fraîche (£8.50), served on a bed of green leaves, which were tasty and freshly made, though there were only three of the fishcakes, and the horseradish flavour could have been a bit stronger. Nevertheless, it was a satisfying lunch dish.