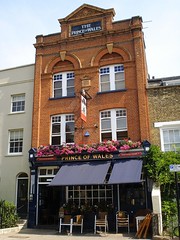 Note: since our last visit to the Prince of Wales, it has been transferred from Shepherd Neame's managed estate to their tenanted division, and as of October 2019 is run by the Black Dog Pub Company. We haven't visited since, and so some of the details below may be out of date.

It's fairly small inside, with seating for maybe about 30 people and not all that much additional standing room; they do have some outside seating though, on the very nice and peaceful Cleaver Square.

Kake visited on a Sunday afternoon in June 2008. Beers available were Spitfire (£3.15/pint), Kent's Best (£2.95), and Early Bird. Most of the other people in the pub were drinking wine, though (or sparkling water in one case). Background music was neither interesting nor offensive. Staff were friendly and chatty, apart from one staff member who seemed a bit shy.

The food menu looked fairly standard, though there were some interesting-looking specials on a blackboard, including tempura king prawns. I tried the onion rings (£3); they were hot and crisply fried but let down by the lack of actual onion; disappointingly, they appeared to be the kind made from shaped batter with chopped onion in. Still, given the decent frying technique, I'd try the tempura prawns if they were still on next time I came back. The people at the table next to me were eating salads; they looked pretty tasty, and one of them involved chorizo so even bob would be happy.