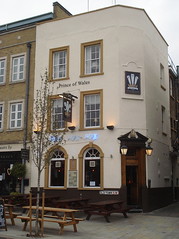 It's dimly (and, for some reason, redly) lit inside, and there's lots of random paraphernalia hanging here and there. Banquettes line the walls and a couple of stools stand at the bar. There's some outside seating on the pavement too.

Kake, Kerry, and Ewan visited on a Thursday evening in September 2014. There were three real ales on handpump: Harvey's Sussex Best, Sambrook's Junction, and Greene King Old Nutty Hen. They also had two real ciders, both from Millwhites: Blackberry Blush and Rum Cask. There were various interesting bottled beers in the fridge too.

It was relatively empty when we arrived around 5:30pm, but by the time we left around 7:15pm most of the seats were taken. Music was playing, not too loud.

According to the 2015 Good Beer Guide, pizzas are available in the evenings. According to a board outside in September 2014, there's a quiz from 8pm on Thursdays.