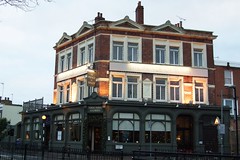 This long-standing pub closed in early 2014 to make way for a new Tesco, according to a Pubs Galore comment.

Taking over from its previous incarnation as the Settle Inn, this place has inherited a stripped-out seating area, which may have once been two rooms, but is now one large space with bare wooden floors, slightly chilly in winter. A range of seating is available, all sturdy wooden furniture, with a few long tables. The sign on the front advertises a beer garden.

The bar has three handpulls for ale, with a fine cask of Meantime London Pale Ale (£3.15/pint), Adnam's Old Ale and Old Rosie cider available on a November 2009 visit. They also have draught lagers including Leffe, Erdinger and Bitburger, as well as Aspall's cider.

Food is served from a reasonable menu. Ewan shared the vegetarian platter (around £9) photo, which was a little disappointing, featuring mainly bread with a few dips and some olives and feta cheese.