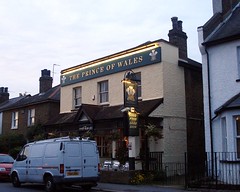 There's some seating out the front, squeezed into a small patio area between pub and pavement. Entry is into a drinking area with a quiz machine, a flatscreen, and seating including a sofa. There are more tables beyond the bar, and right at the back is a dining room with tables ready-laid with cutlery. According to the 2011 Good Beer Guide there's a garden at the rear, and dogs are welcome.

When Kake and James visited on a Tuesday evening in October 2010, two real ales were available: Sharp's Doom Bar and Greene King IPA. They also had Gaymers and Addlestones Cloudy cider. When Kake visited again on a Saturday lunchtime in June 2012, the Doom Bar (£3/pint) and GKIPA had been joined by Wadworth 6X, and the Gaymers had been replaced by Aspalls.

On both our visits, service was friendly and music was playing quietly. On our evening visit, a group of people were playing the quiz machine noisily and the lighting was notably bright, but this didn't really detract from our enjoyment.

As of June 2012, food is served noon-3pm Mon, noon-3pm and 6pm-9pm Tue-Fri, noon-9pm Sat, and noon-6pm Sun. It's all fairly traditional pub food, with the addition of "hot rock" meals using the Black Rock Grill system of tabletop grilling (a bit like Korean barbecue but on a portable grill with heat provided by superheated stone slabs). (Menu photos as of June 2012: 1, 2, 3, 4, 5, specials board.)

In October 2010 we tried the potato skins (£4), stuffed with cheese and ham and served with a mixed salad. We'd been expecting them to come as wedges for sharing, but instead they were more like stuffed baked potatoes, consisting of two half-potatoes filled to the brim with stuffing and topped with dried herbs. They weren't bad, though; the ham was decent quality, they came with a generous quantity of sour cream on the side, and although the salad dressing was from a bottle the salad itself was quite interesting, with red onions and varicoloured peppers.

In June 2012, Kake's mushroom and brie sandwich (£4.75 including salad and chips) photo was pretty tasty, with plenty of brie, nicely browned mushrooms, and some well-fried onions as well (these were possibly supposed to be the "caramelised onion relish" that was advertised as coming with the sandwich). The chips weren't a huge portion, just about the right size to have with a sandwich. The salad was again quite interesting, including various colours of bell pepper, cucumber, onion, and mixed salad leaves; and the dressing was home-made this time.

According to a board seen outside in October 2010, quiz night is the last Thursday of the month, with a maximum of five people per team.

Kake's verdict: A pleasant traditional pub that I'd happily come back to.

Accessibility: Two or three steps up to get in. Step-free to bar, seating area, and toilets once you're in. Not sure about access to the beer garden.