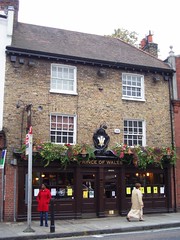 The interior of this pub rather defines cosy; even on a weekday evening at the height of summer, the wood-panelled room which extends around either side of the central island bar feels welcoming in a small town sort of way. There is a small patio out the back of the pub for smokers, with four tables overlooking the attractive open space around South Grove.

There are four handpulls at the bar, which on Ewan's July 2011 visit had four bitters on, including Butcombe Bitter (for which the pub had branded glasses, suggesting it may be a regular), Daleside Nightjar and two others. Ewan's pint of Daleside (£3.50/pint) was well-kept.

Music was playing inside, though not too loudly.

According to the 2009 Good Beer Guide, Thai food is served lunchtimes and evenings.