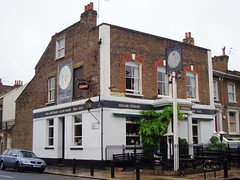 The floor is worn bare boards, and the walls half-panelled. Heavy velvet curtains hang to the sides of the large windows. Interesting grasses are displayed in a large vase on the bar and in small decorative bottles on the tables, and a bust of Brunel sits high above the bar back, flanked by glass cases of stuffed birds. There's a patio-style beer garden out the front.

Kake visited on a Saturday afternoon in June 2017. The beer garden was full but there were only three or four people inside, having conversations about everything from the Rolling Stones to Shakespeare. No music was playing when I arrived, but one of the other customers put some on quietly on the jukebox later. Service was friendly and helpful.

Accessibility: Flat access to the patio beer garden in front. Two steps to get into the pub from here, one of them small and the other larger. No steps from here to the ladies' (gents' not checked).

Kake's verdict: I liked it here, and would come back.