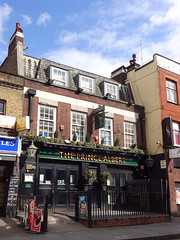 There are always a couple of real ales on (Ruddles and Wychwood when itsbruce visited in November 2008), though it sadly no longer has the Flowers Original that used to be a permanent feature. When Northern Steve visited in June 2017, they had BrewDog Punk IPA on tap for £4.75/pint.

On a Wednesday evening in June 2017, there was a music quiz advertised that night and and open mic the next night. We don't know if these are regular events or one-offs.

itsbruce's verdict (November 2008): Despite several attempts by the owners to rebrand this pub and the death of the remarkable landlady who fended them off, this is still one of the best pubs for miles. This was true even before almost all the good pubs in Brixton disappeared, and the essential character of the pub has not changed. It has a loyal and friendly clientele (a "mixed" crowd in all the good senses of the word), many of whom have been regulars for years and who contribute much to the atmosphere. Unlike the unpleasant and soulless Prince just down the road, it's never aggressive even when packed (which usually happens only when there's a concert at the Academy). During the day it's a cool, quiet and spacious place to relax.

Northern Steve's verdict (June 2017): Still nice, though I suspect trendier than it used to be. Still seems a nice venue.