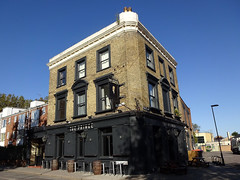 Pub with microbrewery in Wood Green.

The main part is a single room with a gantried bar to one side. Walls are shades of grey, the bar and its gantry are black, and an ornate black wire-frame chandelier light fitting hangs from the ceiling photo. Despite all this monochromicity, the feeling is still light and spacious, helped by the large windows looking onto a strip of parkland that separates the pub from the main road beyond. Modern art hangs on the walls. Seating here is at sturdy wooden tables, with a mix of freestanding wooden chairs and padded benches around the walls.

An arched doorway to one side leads to a smaller side room with benches, exposed brickwork, and a view onto their microbrewery photo. There's also a small amount of seating on the pavement out the front, a combination of picnic benches and tall stools at barrel "tables". External tiling here photo reveals that the pub was once called the Prince of Wales.

Kake and bob visited on a Monday lunchtime in October 2018. We were the only customers when we arrived at noon, and this remained the case throughout our visit. Music was playing, not too loud at first, but another staff member arrived later and turned it up to the point of being somewhat annoying.

Four of the six handpumps were clipped, for Pomona Island Stout, Uley Harvest Special, Burning Sky Plateau, and their own ("House Brewery") 405 Session Pale. They weren't able to do a proper pint of lime and soda, due to only having posh soda in bottles (their ice was also crumbly and low-quality).

Food is provided by a frequently changing series of popups. As of our October 2018 visit this was Mexican menu photo 1, menu photo 2; according to the Prince website, served noon-10pm Mon-Sat and noon-8pm Sun.

Garlic kale (£2.50) photo had a good flavour; bob liked the texture but Kake found it under-cooked. Frijoles (stewed black beans; £4) photo were OK though a little dull. Fried esquites (sweetcorn with herbs, chilli, and lime; £3.5) photo were good, with a crisp juiciness to the sweetcorn and plenty of flavour from the seasonings.

Chickpea chips (£4.50) photo were very cleverly made from some sort of thick chickpea batter, with a soft interior and a crisp, non-greasy crust. The same trick was used for the chickpea fritters (£12 including roasted sweet potato and salad) photo.

Fish taco (£5) photo had a good flavour in the fish, but this was somewhat overwhelmed by a large amount of sliced cabbage with mayonnaise; such a large amount that we had to remove some of it in order to be able to actually eat the taco. Mushroom taco (£4) photo was stated on the menu as involving huitlacoche, but this wasn't apparent in the actual item. The tortillas used to wrap both tacos were nicely thin and fresh.

Accessibility: Two steps to get in at one entrance, and a single larger step at the other. No further steps to the toilets.