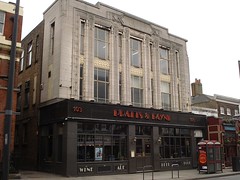 It was opened by Antic in March 2012 in premises previously occupied by an instance of the Goose pub chain. In late 2020, a notice appeared on the Pratts and Payne website stating that several pubs, including this one, had been taken out of the hands of Antic and transferred to the management of Portobello Brewing. In November 2021, Portobello announced that it had acquired the freehold. We haven't visited since the transfer from Antic to Portobello, and so some or all of the details below might be out of date.

The characteristic "quirkiness" of Antic pubs is well in evidence photo, with the usual mismatched furniture, standard lamps, and random house-clearance bits and pieces displayed here and there. Shelves of old books line the stairwell, and dividing walls and display cases break up the large room, giving an almost cosy feel in places. There's a beer garden out the back. The repurposed theme even extends to the ladies' loos, with old front doors used as cubicle doors (one with knocker still attached), Singer sewing machine covers fixed to the wall as cubbyholes, and a Butlinland teatray acting as a splashback under one of the hand-driers.

Kake and bob visited on a Monday Bank Holiday afternoon in June 2012. There were six or seven ales on the handpumps, including Moorhouse Pride of Pendle (£1.70/half) and Devilfish BE:ER (£3.40/pint). They also had various keg things like Meantime London Lager and Amstel.

There were only a few other people in when we arrived around 1:30pm, but due to the arrangement of the interior we didn't feel as though we were rattling around in a big empty space. Music was playing, not too loudly, and service was friendly.

According to the Pratts and Payne website as of June 2012, food is served 6pm-10pm Tue-Fri, noon-5pm and 6pm-10pm Sat, and noon-5pm Sun. They seemed to be running on weekend hours on our Bank Holiday visit, so we were able to try some of the food photo of menu. Hand-cut chips (£2.50) photo were fine, and came skin-on and not pre-salted. A starter/small plate of goats cheese tart with caramelised onion, figs, and honey (£5.50) photo was also pretty good; nicely balanced in terms of both flavours and textures.

Accessibility: A step to get in. Toilets are up a flight of stairs with a u-turn in the middle and a handrail on one side. There is an accessible toilet on the ground floor.