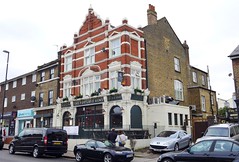 It's a single room with the bar along one side and a semi-open kitchen at the far end of that. The floor is wooden blocks and the walls wooden panels, and the two large pillars that break up the room are also covered with wooden planking. Most of the seating is regular-height, provided by a mix of plain wood and brightly painted upright chairs, but there are also a couple of sofas and fixed benches near the large front windows as well as a handful of stools lined up at the bar.

There's decking at the front with picnic benches, and out the back there's a part-paved, part-decking garden, with a covered section to one side. Fresh flower buds sit in empty craft beer bottles on the tables, but there's also a fruit machine at the back by the door to the beer garden. Overall, it feels like a traditional pub that's been smartened up a bit, but without losing its soul.

Kake visited on a Monday afternoon in September 2019. There were four other customers when I arrived a little before 4pm, a couple of them working on laptops. Music was playing, not too loud.

According to a poster seen in September 2019, there's a quiz every Monday at 8pm.

Child-friendliness: They have a children's menu and at least six highchairs (IKEA Antilop without tray); there's also a gallery of children's drawings on a room divider at the back.