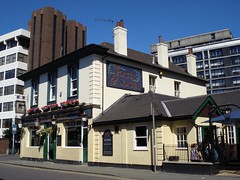 Decent enough Marston's pub right next to East Croydon Station (to find it, head down the right hand (east) side of the station where the taxis are).

It's quite large inside, but broken up with screens and railings, so it doesn't feel too cavernous. Decor is traditional chain-pub style. One point of interest is the square skylight with a wrought iron light fitting.

There are around half a dozen handpumps on the bar, and usually three or four real ales on. In March 2008, these were Marston Pedigree, Jennings Cumberland, and London Pride. In April 2012, Ringwood Forty Niner was £3.10/pint. In February 2015 there were three or four on, including Ringwood Best Bitter; a pint of lime and soda this time was £1.50.

In March 2008 there was background music playing, but it was inoffensive and not very loud. On a Wednesday evening in April 2012, loud music was playing, turned up louder around 5:20pm or so. There's usually been quite a crowd around the bar on our visits, but generally there are free tables further into the pub (up on the dais).

Food is served all day from a chain-wide menu, including breakfast served until noon. Table service is available for both food and drinks (not sure if this is all the time, or just in the evenings). You can also order at the bar; they will want your table number for this.

In February 2015, Kake tried the vegetarian Lancashire hotpot (£8.15) photo. This was a good idea, but not brilliantly executed. Some of the roasted vegetables in the hotpot were undercooked, and some of the butter beans went very hard in the reheating process. The promised cheese turned up as a small melted lump in one corner of the dish. It was tasty enough despite all this, but very expensive for what it was. In December 2015, a flat mushroom and creamed corn ciabatta (£5 including chips) was more successful, with a good mix of texures, a nice creamy flavour, and worth the price.

Accessibility: At least one of the entrances has a step, but there's possibly another one without. A fair bit of the seating is on a dais. There is an accessible toilet.