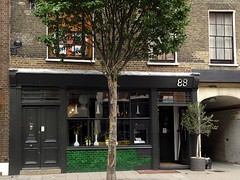 Modern European restaurant with a Portuguese focus, located on St John Street in Clerkenwell. It closed in February 2015.

Entry is into the bar (where tapas are also available throughout the day). This is a fairly small space, dimly lit in the evening, though not too dark to read a book. Stools line the bar, making it sometimes a little tricky to get served. There are two or three tables too, though, which can be reserved, as well as some more barstool seating in a small room to one side of the bar.

Further back is the restaurant — a smallish space opposite the open kitchen leads up a couple of steps to an interesting conservatory-style room with glass walls offering a view of swaying greenery without the accompanying weather photo.

Kake, Ewan, doop, et al. visited as a party of nine on a Friday evening in February 2010. When booking over the phone, the restaurant staff had led us to believe that we'd have no problem gathering in the bar beforehand; in reality, given the small size of the space, this proved implausible. Luckily they were happy to give us our table early, for cocktails and wine while we waited for everyone to arrive.

Decent enough bread was brought along with olive oil and balsamic vinegar, and once we were all assembled and ready to order, we were presented with an amuse-bouche of smoked salmon on cucumber in a gazpacho sauce; pleasant enough photo.

Kake and Marna started with sauteed queen scallops with lemongrass, baby asparagus, and sorrel salad (£7). The lemongrass was subtle, if it was present at all. The plate was decorated with a few squiggles of sweet-chilli-sauce-from-a-bottle, and the "sorrel salad" was merely a single folded sorrel leaf used to prop up the scallop shells (and Kake's was wilted at one end). Served two per portion, the scallops were a decent size, but one of Kake's was rather gritty.

Shana's caldo verde with paprika foam (£5) was disappointing; the paprika foam was absent, and no explanation for this was offered until we pressed them (apparently it didn't come out right when the chef tried it). The soup on its own was quite bland, even with plenty of salt and pepper added.

Ewan's starter was port-marinated beef carpaccio with parmesan cheese and thyme sorbet (£8) photo. The beef itself was not especially memorable, but the sorbet was lovely.

Kake's main, grilled squid stuffed with prawns and served on a bed of sauteed spaghetti squash and mushrooms (£17) photo, had one high point — the small and fantastically crispy knot of tentacles. Unfortunately the rest of the squid was chewy, and the prawn stuffing a little dry and overcooked. In this context, it wasn't entirely clear whether the squash was slightly undercooked on purpose or by accident; luckily, the undercooking worked well.

Ewan's main of sauteed venision with chestnut and mushroom ravioli (£24) photo was pretty good, but the venison was not cooked medium-rare as requested.

We also had side orders of sauteed mixed vegetables (£3), which were fine, and skin-on sauteed potatoes (£3.50), which were again fine if rather salty — in fact, a number of our party remarked that the salt levels in general were quite high.

Desserts went some way towards ending the meal on a higher note. Kake's torta de azeitao with cheese on homemade biscuit (£6.50) was perfectly pleasant; the cheese was well-chosen and served slightly warm, which enhanced the flavour and made a nice contrast to the lightly chilled torta. Ewan's chocolate demi-cuit with cardamom and white chocolate icecream and date sauce (£10) photo turned out to be a sort of tart with melty chocolate inside, rather nice.

Service was OK, if sometimes comically slapdash. A service charge of 12.5% was auto-added to the bill.

Kake's verdict: I was a little disappointed; the food was generally not as well-executed as it should have been given the prices. I probably wouldn't come back unless I was with someone else who specifically wanted to eat here.

Note that as of early 2010, parties of eight or over must either pay a £20/head deposit or give a credit/debit card number on booking.

Accessibility: One fairly high step up to get in. Level access to the bar, toilets, and some of the restaurant seating from there; much of the seating is up two more steps to the back.