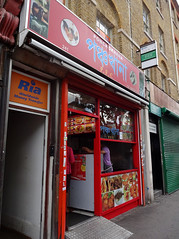 An open window at the front offers a view onto the flat grill where paratha are cooked fresh, and just beyond this is a glass-fronted counter where curries are laid out ready for reheating (though all are also listed on the menu photo).

The cafe seats just 24 people, with tables tucked into several small areas separated by false walls. White-painted walls are enlivened with pink and green sparkly tiles, and the red melamine table tops are echoed in the red pleather upholstery of the tall-backed steel-framed chairs. A basin for handwashing sits in one corner.

Kake visited on a Monday lunchtime in July 2016. There were three or four other customers in when I arrived around noon, but all had gone by the time I left half an hour later. No music was playing. I placed my order at the counter and was invited to sit wherever I liked.

Rui shatkora (fish and potato curry; £5.50) photo was pretty good. The fish was very flavourful in itself, and not at all overcooked despite having been reheated. The sauce, which included well-fried sliced green chillies, added more savouriness, and had soaked in well to the soft potatoes.

Rice (£2) was relatively soft but not overcooked, and the grains were nicely separate. A plate of salad was placed on the table to accompany my meal (and not charged for); this was fine though nothing special. All in all, it was exactly the right amount for lunch.

I'd asked for masala tea, but they don't do it, so they brought me plain milky tea (£1) instead, heavily pre-sweetened.

The staff were friendly and helpful. No service charge was added to the bill.

Kake's verdict: I'd happily come back if I was in the area and needed a quick meal.

Accessibility: A ramp to get in. No internal steps, but it's quite small inside and the toilets in particular are very cramped.