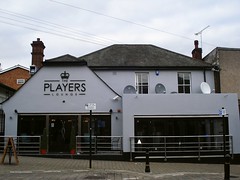 The Players Lounge used to be a bar in Buckhurst Hill, previously known as Rocky's, and before that as Blue Mondays. It closed down in 2009 and after a period of refurbishment reopened as Konbu, a pan-Asian restaurant with robata grill.

The info below is retained for people who want to know what it used to be like as the Players Lounge.

Bar in Buckhurst Hill. Previously known as Rocky's, and before that as Blue Mondays.

In the daytime, it's not actually as bad as it looks/sounds, though it's probably much less pleasant in the evenings and on weekends (Friday evenings feature club nights run by Sintillate, which should give you an idea). Admittedly when Kake and James entered, on a Monday lunchtime in March 2008, we were slightly worried that we'd accidentally walked into a swingers' club. Still, the group of mums with buggies who appeared a little later on reassured us somewhat. (We basically only came here because we were hungry, and it was about to rain, and our Plan A of the Three Colts on Princes Street was shut.)

No real ale, but they did have Hoegaarden (£3/pint), albeit served in an ordinary pint glass instead of the usual octagonal thing. Diet coke was £2.50/pint.

Food is served noon-5pm every day. Kake's tuna mayo sandwich was OK, though very unexciting; basically just canned tuna mixed with mayo and shoved between slices of supermarket wholemeal. The accompanying side salad was good, however, and although the price (£5.50) seemed rather high, you do get three triangles rather than the usual two. James seemed happy enough with his burger with bacon (£7, including some fairly standard pub chips and another decent side salad).

Service was fine, attentive and friendly without getting in the way. (It's table service, though I think you can go to the bar if you want to.) The decor is incredibly cheesy, with shiny black surfaces and exhortations of "love", "sex", and "kiss" in large silver letters about the place.