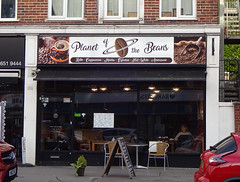 It has an open feeling despite the small space, with a fully-glazed frontage letting in plenty of natural light towards the front. The flooring is a mix of matte black tiles and worn wooden boards, the tables are varnished light wood, and generic art prints hang on the walls. A large service counter built from reclaimed planks is against one wall, with seating running opposite.

Kake visited on a Friday morning in January 2019. It was quite full when I arrived a little after 9:30am, and I ended up sharing a table. It quietened down a little during the morning, but filled up again around noon. Music was playing, not too loud.

Eggs royale (£6 including a cup of tea) photo was a bit odd. It was served on a bagel rather than an English muffin, and the bagel was so hard I couldn't cut through it and resorted to scraping off the toppings and picking it up to bite it. The smoked salmon was saltier than ideal, but OK apart from that, and the egg was poached competently. The hollandaise had completely split, and I wondered why neither cook nor waitstaff had noticed this.

Service was friendly, welcoming, and efficient. No service charge was added, but there's a tip jar by the till.

Laptop-friendliness: They have free WiFi — ask staff for the password — and at least one pair of usable power sockets.

Child-friendliness: They have a selection of children's books and toys.

Accessibility: No steps to get in, and no steps (but slightly narrow access) to the toilet, which is a single decent-sized cubicle.