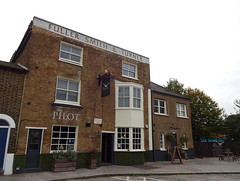 Fuller's pub and hotel on the North Greenwich peninsula. It was previously known as the Pilot Inn photo, but following a late-2013 refurbishment shortened its name simply to the Pilot.

This pub is an anomaly not far south of North Greenwich Station. It sits at the end of a perfectly-preserved early-19th century terrace comprising about 10 houses, completely surrounded by a mixture of new-build housing (the northern reaches of the Millennium Village) and brownfield sites in the process of redevelopment. As such it is almost picturesque in its quaintness for this part of town.

Because it's just that little bit far south of the O2 Centre, it manages to largely avoid the concert-going crowds, but it's certainly worth seeking out. What's best is its cosy atmosphere of a traditional pub, which from looking around is pretty much unique now on the Greenwich Peninsula.

Entry is into a bar area with hexagonal tiles on the floor and tall stool/table seating. A small snug to one side is packed with armchairs, and to the other side, past the bar, steps lead up to a seating space with normal-height chairs and tables and access to balcony seating photo.

Alongside this is tucked away yet another space, on the same level as the bar, with an eclectic mix of seating including a sofa and a tall table with a globe embedded in one end. More steps lead down from here to a small but light and bright conservatory seating area, with large patio doors looking onto a garden. The garden itself is part-paved and part astroturfed, and seating is a mix of freestanding tables and chairs and covered booths with long padded benches. There are six or seven picnic-style tables out the front of the pub as well.

When Kake visited on a Monday morning in October 2018, there were a couple of other breakfasters in the conservatory as I arrived around 8:30am, and more arrived while I was there, apparently all guests at the hotel. It emptied out entirely post-breakfast, and by 10am I was the only customer aside from a few hotel guests coming through to check out. Music was playing quietly during breakfast but turned off afterwards. Service was welcoming and helpful.

There are six handpumps on the bar, which on our October 2018 visit were clipped for London Pride, Red Fox (the Fuller's autumn seasonal), Seafarers, Oliver's Island, and Dark Star Hophead. A pint of lime and soda was £1.10.

In June 2009, Ewan's mushroom and spinach pasta was pretty tasty, not too oily, with a couple of nicely-toasted slices of garlic bread and a small leafy green salad, and on an earlier visit, the vegetarian burger came in a white bun with some lovely crispy fries and was perfectly good, possibly a little better than the standard. At one end of the bar was a refrigerated cabinet containing an awesome selection of cheeses.

In October 2018, Kake's eggs florentine (£7) photo were quite disappointing. The muffin was very hard, to the point where I could only cut through about half of it; the spinach was gritty; the poached eggs were overcooked, with near-hard yolks; and the watercress on top was a little past its best. Surprisingly, given all this, the hollandaise was very good: smooth, thick (but not too thick), and well flavoured. Complimentary tea came from the breakfast buffet table, via a basket of individually-wrapped teabags and a flask of hot water.

They have free WiFi, but this appears to be web-only; in October 2018, Kake was unable to get ssh working.

Child-friendliness: They have at least three highchairs, the type with no tray and very little back support. There's a pull-down nappy change table in the accessible toilet.

Accessibility: A step to get in at the main entrance, but there's step-free access at the side via a ramp. Once you're in, it's level to the bar, toilets (including an accessible one), and some of the seating. Half a dozen more steps with handrail to get down to the conservatory (where breakfast is served) and garden. Much of the seating on the same level as the bar and toilets is on high stools.