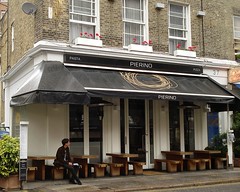 It does basic pizza, pasta, and secondi dishes, and is veggie/vegan friendly (as with most Italians) — it will do cheese-free pizza on request. Service is quick, and it's reasonably priced. The garlic bread is *huge*.

There are some outside tables, but Thurloe Place isn't exactly the most pleasant of roads to sit out on. Inside is seating at tables with plastic tablecloths, all quite crowded together but not too badly so for a London restaurant.

It certainly used to do very good pizzas as bob recalls (the Diavalo being the best). The base was thin enough even for me. The garlic bread was also very good. A better choice than the other places nearby during my time as a student.

_Dave went on 29 May 2009. Having been there a few times round 2002/2003 and found it a friendly, slightly dingy, well-priced place, went back as it's close to the V&A. It's been thoroughly renovated. The food and staff appear pretty much the same though. Our pizzas were up there and the tiramisu was better than fine. Definitely somewhere to keep in mind if you're in the area.

Very busy on a Saturday night.