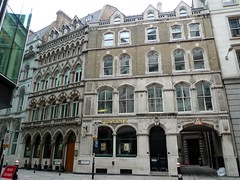 It's large inside, and high-ceilinged, but the space is broken up somewhat with pillars and a multi-level floor. The bar stretches along one side of the room, with five handpumps, several keg taps, and an impressive display of spirits on three long shelves behind. A dais opposite gives a good view of most of the room, and a small stone-tiled nook in one corner offers a quieter space to sit as well as access to the lunchtime sunlight.

Seating is provided by high tables and stools, padded banquettes, and normal chairs and tables. The decor is an odd mix, with varnished wood flooring underfoot and exposed ducting above, and the paintwork is a not entirely harmonious combination of light brown and dark grey. There's at least two flatscreens.

Kake visited on a Wednesday lunchtime in September 2016. It was about half full when I arrived around 1:15pm, with plenty of lively conversations going on. No music was playing. A news channel was showing on the flatscreens with the sound off.

There were five real ales on: Broad Street Brew (labelled as their "house ale"), Vale Brewery Moon, Wadworth Horizon, Aylesbury Brewhouse Co AU 79, and Greene King IPA. A half of lime and soda was £1.10.

According to their website as of September 2016, food is served 7am-9pm Mon-Fri (breakfast menu up to 11:30am and regular menu thereafter). They also do bar snacks; on our September 2016 visit there were scotch eggs and sausage rolls on display behind the bar. They appear to offer table service for both drinks and food, but most people on our visit were ordering at the bar.

According to a sign seen in September 2016, it's possible to hire out the space on weekends.

Accessibility: Three steps to get in, but there's a stairlift attached to them. Once you're in, much of the seating and a RADAR-locked accessible toilet are on the level. Other toilets are in the basement down a straight flight of stairs with a sturdy handrail on both sides. Some of the seating is on a dais up two or three steps.