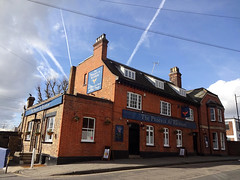 Pub in Rainham. It went through a period of being known as the "Phoenix at Rainham" after a closure and change of management around the end of 2018, but later reverted to its previous name of the Phoenix.

Note: According to the June/July London Drinker, the return to its previous name was in conjunction with a "major refurbishment". We haven't visited since the refurb, so some or all of the details below might be out of date.