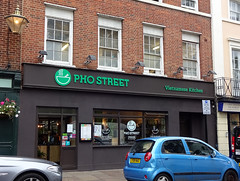 It seats around 50-60 in a brightly lit room that feels rather like a canteen. The walls are a mix of possibly-reclaimed planks, exposed brick, and a large photo of a market scene (presumably Vietnamese).

They have a rather odd hybrid service system in which you're met by a staff member on entering and led to a table, then sent back to the counter by the door to order and pay. Another staff member then follows you to your table to put down a napkin (chopsticks, forks, and spoons are already in holders on the tables).

Kake visited on a Friday lunchtime in September 2019. There were around eight or nine other customers in when I arrived around 12:45pm. Perky music was playing quietly (a little odd, seemingly a set of covers of 3-4-year-old chart hits).

I had the bun noodle salad with grilled pork (£9) photo. The veg and herbs were fresh, and the noodles soft and supple. The pork was flavoursome, well seasoned, and a good mix of fat and lean, though very carelessly sliced — it was obvious that the knife hadn't gone as far through as intended. (The "julienned" carrot had the same problem.)

Service was friendly but rather awkward. No service charge was added to the bill.

Kake's verdict: I'd come back if I needed a quick meal in Greenwich.

Accessibility: A tiny step to get in, about an inch. Level to the toilets once you're in, though huge inward-opening doors make it hard to get in and out of the cubicles.