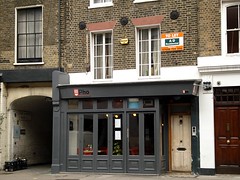 Vietnamese place in Clerkenwell selling pho amongst other things. They also do takeaway. They have another branch in Fitzrovia.

Bob visited in January 2007. The food was tasty, helped by the large bottle of chilli sauce you could add. The fish sauce was quite pungent too.