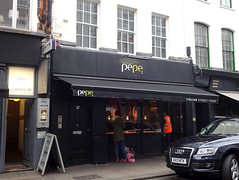 Small Italian cafe and takeaway on Old Compton Street in Soho. It has another branch on St Martin's Lane.

It seems mostly geared for a takeaway crowd, with pizza slices on display in the window and several tubs of pasta behind a large counter. Seating comprises a dozen small tables and a ledge with bar stools along one side. The decor is quite trendy and modern, but mercifully there's only one bare lightbulb.

On Kat’s Wednesday lunchtime visit in August 2016, a regular-sized takeaway portion of melanzane e bufala pasta (£5.50) featured plenty of aubergine and tomato, the latter having a surprisingly decent flavour. My server immediately heated up my (cardboard) box of pasta in the microwave without asking, but did then ask if I wanted parmesan.

It’s an extra pound to eat in. The prices on the website appear to be a little out of date (the website also autoplays video in the background). Opening hours seem to vary according to different websites, but it appears to be open until at least 11pm Monday to Saturday.

Accessibility: a step to get in, then level on the ground floor (counter and seating area). The tables are small and quite close together. Didn’t check the toilets.