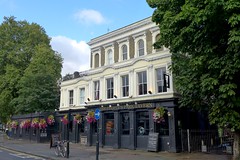 Pub in South Hackney, with its own microbrewery.

Inside, it's all dark wood, burgundy paintwork, and exposed brickwork. Seating is a mix of low stools, mismatched wooden chairs, and a couple of leather sofas. An area of slabby wooden tables and benches at one end has a view onto the microbrewery through a large glass window, while a pinball table and photo booth are available at the other end for those requiring more active entertainment.

There's something of a "free speech" theme to the more portable parts of the decor, with nine small loudspeakers hanging in a row from a ceiling beam, a huge wooden carving of an open mouth shouting into a loudspeaker at the other end, a sign reading "speakers' corner", and a large painting of the quotation "I disapprove of what you say, but I will defend to the death your right to say it." (Here, as in many other places, the quotation is misattributed to Voltaire.)

Double doors lead out the back, first to a decent-sized patio area (with a table football table) and then to a huge astroturfed beer garden, with long lines of picnic benches across the middle and covered timber-framed booths around the edges. A mini golf course is at the rear, alongside a gate leading into Victoria Park. Trees surround the garden both in and outside the fence, including a couple of very mature specimens providing plenty of shade. Samples of bird poo here and there on the tables under the trees warn of the risks of sitting there (we risked it, and were unlucky...)

Kake visited on a Wednesday afternoon in September 2016. There were a couple of dozen other customers in when I arrived around 3:15pm, most of them in the garden enjoying the sunshine. Music was playing both inside the pub and in the beer garden, relatively interesting, but verging on intrusively loud inside (it was fine outside).

There were four real ales on, all under the brand of their parent company, Laine's: Victoria Park APA, MewTwo, Summer Garden Pale, and Red Empire. (According to the 2017 Good Beer Guide, all the cask ales are brewed on site.) They also had two real ciders on handpump, both from Orchard Pig: Explorer and Hog Father. A pint of lime and soda was a pleasingly-cheap 70p.

According to their website as of September 2016, food is served until 9pm Mon-Tue and until 10pm Wed-Sun.

According to the 2017 Good Beer Guide, they do comedy, quiz, and DJ nights. There's also a craft beer bottle shop upstairs, which as of September 2016 is open from 5pm on weekdays and from noon on weekends.

Dog-friendliness: According to their website as of September 2016, dogs are welcome. On our September 2016 visit we noticed they'd set out bowls of water for dogs in the beer garden.

Child-friendliness: According to their website as of September 2016, under-18s are allowed until 7pm but must be supervised at all times. There's a pull-down nappy change table in the ladies' (gents' not checked).

Accessibility: A ramp and then a tiny step and a 90-degree turn to get in. No steps to the ladies', though there is a ridge, and all the cubicles except the one at the far end are quite a squeeze to get into. No steps to the beer garden, but access to the astroturfed part is over some very uneven planking.