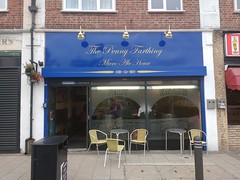 Micropub in Crayford, in the Good Beer Guide.

It's fairly characteristic of the genre — a single room in a converted shop, with a hard-wearing carpet, plain walls covered with old pump badges photo, and a small service counter in the corner. Fresh hops hang along the ceiling, and a couple of old barrels stand by the window for people to rest drinks on. There are a couple of tables outside on the pavement too.

Kake and bob visited on a Tuesday afternoon in September 2016. There were four other customers in when we arrived around 5:15pm. No music was playing. A sign warned that mobile phones should be put on silent photo.

Food is limited to bar snacks such as pork pies, pork scratchings, pickled eggs, and so on. We tried a pork pie (£3) photo, which came nicely presented with a garnish of tortilla chips and a little dish of condiments including Branston pickle, mustard, piccalilli, and a cherry tomato.

Accessibility: A small step to get in. All the interior seating is on high stools or high benches. There's a step to the toilet.