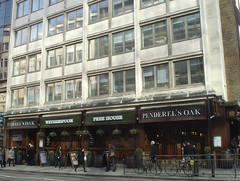 Food is served, standard Wetherspoons menu with the usual offers.

When secretlondon visited in May 2016 it was packed on a weekday evening, in both bars. Beer was £3-something a pint.

A disabled toilet (I think with a radar lock) was on the ground floor. The normal toilets are downstairs next to the cellar bar.