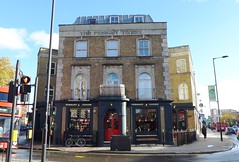 It was refurbished and reopened in 2006, and remained under the same ownership until May 2018, when it was taken over by local brewery Five Points.

As of June 2018 the kitchen is closed and they have a bring your own food policy, but they intend to start doing food again in the future.

We haven't visited since the acquisition by Five Points, so some of the information below may be out of date. However, according to a Five Points blog post, they don't plan to make any major changes in the near future.

Geek-friendly landlord, good food, free wireless access. It was non-smoking even before the ban. At weekends, you can often find a mix of board gamers and parents with children at the many tables in the large open space that takes up most of this pub.

There are 16 hand pumps, typically with around eight beers available, mostly from the Milton Brewery. Pint-to-line glasses are standard, and the staff are happy to let you try things before you order. On an October 2008 visit, they had Sparta and Pegasus as well as Minotaur (the mild), and some guests like Milestone's Cromwell Gold, Banks and Taylor's Two Brewers Bitter and others, though the guests change frequently. During winter, they also have mulled mead available.

For lager drinkers, there is Moravka unpasteurised lager (£3/pint) and Blanche de Bruxelles wheat beer was on draught in February 2009. They keep good cider on hand too (though surprisingly had run out on an October 2008 visit), a good selection of bottled Continental beers, and sensibly priced soft drinks. Sam particularly recommends the Rauchbier (smoked beer). As of May 2008, a half-pint of grapefruit juice was 80p, and the various real ales that we tried were £2.90/pint.

Pool table and bar billiards table, plus board games behind the bar (a chalk list of them is displayed at the side of the bar).

Food is served noon-3pm and 6pm-9pm (noon-9pm on Sundays). See website for the current menu. On the till system, the options for "how would you like your steak" starts at "blue". They do a fine (vegan) nut roast on Sundays as well as the usual meat options. The food is always excellent, and good value as well. Vegan and vegetarian options are marked on the menu.

In May 2008, the menu included three vegetarian options and three additional vegan/veganable options, plus a vegan dessert (rhubarb, pear, or blackberry crumble served with sorbet, £5). However, bob tried the sirloin steak (£12.50) photo and Kake had the fish pie (£8.50) photo; the fish pie was very good, obviously Real Food made on the premises, and came with some very nicely-cooked vegetables and a scattering of dill seeds. In October 2008, Ewan's halloumi jalfrezi (£9) was far better than expected and nicely spicy ('hot' was requested, of the two options given) photo, and a vegetarian haggis with neeps and tatties was hearty and filling in February 2009.