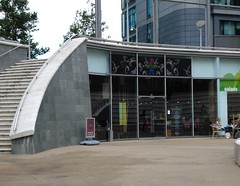 It specialises in dim sum, with a full range on offer at lunchtimes and a smaller selection available in the evenings (along with other Cantonese dishes). A number of the dim sum dishes have a Japanese influence, for example the wasabi prawn dumplings, or the duck spring rolls which come wrapped in a little circumference of nori. Unusually for a dim sum place, they offer a nine-piece dim sum taster platter, making it feasible to eat here alone or in a small group while still getting the chance to taste a variety of things.

Kake has visited for dim sum several times now, often in the company of Leon and other London Perlmongers, but most recently as a solo visit in December 2017. We've not booked on any of these occasions, but they've always been able to fit us in, even when we had a party of 11; the longest they've kept us waiting was on that solo visit just before Christmas, and they were so busy then that it was pretty impressive they found space at all.

On our first visit in July 2007, there were only three of us so we all went for the dim sum taster platter (£9.80) annotated photo. It wasn't bad at all, though it was composed entirely of steamed dishes — really, a dim sum meal should include both steamed and fried items, to give contrast. The only thing on the platter Kake really didn't like was the seaweed-wrapped glutinous rice, which (like our side order of sticky rice in lotus leaf) was rather greasy. The steamed dumplings were pretty good, obviously freshly prepared, and with a very nice emphasis on vegetables.

On our second visit, in April 2008, there were more of us so we ordered various dishes from the main dim sum menu. The sticky rice with mixed meat in lotus leaf was much improved from the slightly disappointing rendition on our previous visit; very good. Spinach dumplings were no longer notably good — a bit salty — though still competent enough. Wasabi prawn dumplings were interesting; subtle wasabi flavour but it was there. Duck spring rolls were excellent. Soup dumplings had a fair bit of soup but were a bit big for Kake's taste. Teapot refilling was pretty prompt. We paid £12 a head for ample food, tea all round, no booze. They brought more portions of the desserts than we asked for, but I don't think we were charged for the extras.

In November 2008, the sticky rice was even better, with large fresh prawns in. Duck spring rolls were still good but perhaps a little drier than last time. Mixed cheung fun were good — the scallop ones had plenty of non-watery scallop, and the meat in the barbecued pork ones was tender and moist, not dry at all, yet not overly fatty, perhaps the best barbecued pork that Kake has ever had. On this visit we paid £10/head.

When Kake visited on a Tuesday lunchtime in December 2017, it was almost entirely full at 1:15pm, but they found me a space at a small table in the corner of one of the smaller rooms off to the side of the main dining area. This was actually ideal, since it meant I wasn't squashed in among larger groups, but they didn't forget about me either, making sure to check in and take my order after giving me a sensible length of time to look at the menu.

Again, I had the dim sum taster platter (£12.80) photo along with a pot of tie guan yin tea (£1.20). It was again all steamed, but a decent variety nevertheless. The sweetcorn included in two of the dumplings (spinach and sweetcorn, and mixed vegetables) was a real standout — not too sweet and cooked perfectly. The prawn and Chinese chive dumpling was also notably good, with loads of flavour from the Chinese chives. A 12.5% service charge was added to the bill.

Kake's verdict: Still one of the best dim sum places in London; the quality and range are both good, the prices are reasonable, and they have proper soup dumplings.

Accessibility: Step-free access throughout, and there's also an accessible toilet. (Note that the toilets are through an unmarked door which isn't easy to find if you don't already know where it is.) Sheldon Square itself is in a sort of sunken basin, with steps to get down. However, there's a lift which is accessed via the Bishops Bridge Road entrance; you need to find the security guards and get them to open the gate for you.

Getting here: Sheldon Square is a relatively new development behind Paddington station. Getting here can be slightly complicated, although it really is very close to the station. The easiest way is to start from platform 8 of the station (you won't need a ticket; there are no barriers to get onto this platform). Walk along the platform away from the main concourse and go up the steps or ramp. You should see a sign for Sheldon Square pointing to your right along a walkway; follow this along until you hit the canal towpath. Keeping the canal to your right, go along a bit until you see another sign for Sheldon Square; follow this sign (left between two tall buildings), then continue forwards and head down the steps into the grassy sunken amphitheatre thing; Pearl Liang is ahead of you on the other side of the amphitheatre.

Note that taxis often have trouble finding Sheldon Square. The road entrance is half way across Bishops Bridge Road which all the taxi drivers know as it's where they queue to get to Paddington Station — it's probably best to just ask to be dropped off on the bridge.