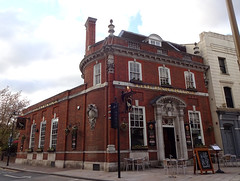 Fuller's Ale & Pie House in Bromley. It was converted from a Natwest bank in 1995, and refurbished in 2005.

The walls are wood-panelled, which looks very impressive, but makes the main room very echoey and loud - particularly if there is a football match on. There is a smaller room at the front (with no TV) as well as another small room at the back (with a TV, but also larger tables), both of which are much quieter, and tables outside under a large awning which act as a smoking area.

On a May 2008 visit, Nick had a lamb pie which was very nice with a rich flavour (around £8), while his accomplice had a spaghetti bolognese which tasted home made, rather than something mass produced in a jar (around £7). With one drink each the bill came to £20.15 - a subsequent pint of 1845 was £3.25. On a July 2011 visit, Ewan and Kerry both enjoyed the fisherman's pie (£8.50), nice and creamy with plenty of fish in it.

There are eight hand pumps with real ale, and the staff were helpful and friendly. Ales available on Ewan's July 2011 visit were London Pride, Discovery, ESB, HSB and Seafarers' Ale.

On a November 2008 visit, AndrewB noted that they stop taking orders for food at 6:50 pm on Sundays - they declined to take a pudding order for us at 6:52 pm.