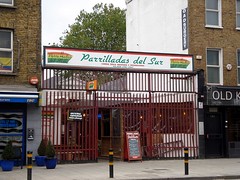 As of April 2014 it's closed, and the place is a building site while the hotel next door is extended. There's no information posted at the site on whether the restaurant will return once construction is complete.

The restaurant is in a courtyard with an entrance to the building ahead and to the right. To the left are very small outside toilets in their own little block. Judging by old photos, the premises used to be a showroom of some sort.

The signage outside is entirely in Spanish but thankfully the menu is bilingual, as is their flyer. However, if secretlondon's experience is typical there is probably not much call for the translation. It felt that this was as much a community centre as a restaurant. Many people were just hanging out, drinking beer and watching loud Spanish-language music on the television. They have PA equipment and advertise live music on Fridays, Saturdays and Sundays. On a Sunday afternoon in June 2009 there was no live music though. To add to a slight tourist feel some of the regulars were wearing traditional bowler hats.

Parrilladas means "grill" in Spanish and the restaurant has a variety of chicken, meat and fish dishes all served with rice and salad. secretlondon had pollo picante (chicken in a spicy sauce, £7) photo which was enormous! It was half a chicken in a not-very-spicy tomato and onion sauce with rice, potatoes and salad. I actually couldn't finish it all! I also had a bottle of water (£1).

They are licenced and sell Bolivian Pacena beer as well as other South American beers and wines (all unsampled).

Accessibility: The toilets are too small to turn round in. Not sure about steps.