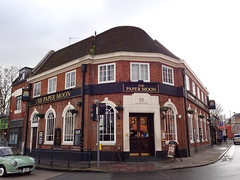 The Paper Moon was a Wetherspoons pub in Dartford. It closed down for good in February 2016.

It's a fairly standard Wetherspoons, with patterned carpet and a combination of freestanding tables/chairs and open booths. The space is quite well-lit for a Wetherspoons, with the corner site allowing several windows. A long, curved bar offers plenty of space for service.

Kake visited on a Wednesday morning in November 2015. There were a fair few people in when I arrived around 11:45am. No music was playing, but there was plenty of lively conversation.

There are nine handpumps on the bar, and at least six real ales seemed to be on, including some from local-ish (Sussex and Kent) breweries such as Weltons, Rockin' Robin, and Dark Star — though Wetherspoons have a habit of not turning round the pump clips when something's gone off, so they might not all have actually been available. Most if not all of them were advertised at £1.99/pint, and a small kilner jar of each was placed by the relevant pump to show the colour of the ale. A pint of lime and soda was 80p.

As with most Wetherspoonses, food is served all day from a chain-wide menu including vegetarian, vegan, and gluten-free options.

There's free WiFi via The Cloud (requires registration but can then be used in all pubs providing Cloud WiFi).

Child-friendliness: A notice seen in November 2015 stated that children are welcome to eat in until 8pm if having a main meal and accompanied by an adult; also, that adults are only permitted two drinks per visit if dining with children. The pub has at least two highchairs, the type with no tray and very little back support.

Accessibility: Two steps to get in at corner entrance, but step-free at the side. Accessible toilet on the level (which, as of November 2015, appears to have had its RADAR lock removed).