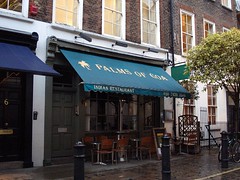 As of June 2012, there were reports on Twitter that this branch of Palms of Goa was closed. It was replaced by a branch of Honest Burgers, which opened in August 2012.

A small, basic Indian curry house on Meard Street in Soho, a small side-street just off Dean Street. It's part of a small chain, with two other locations in the area; Palms Of Goa, W1W 6YR on New Cavendish Street, and another one on Charlotte Street.

It was pretty much empty when DrHyde visited for lunch mid-week, although there were a couple of take-away customers while we were in there. There's some seating outside.

Unlike many London curry places, it's not run by Bangladeshis, and so there's pork on the menu.

DrHyde's Pork Mas was OK but not great. The Karathi Chilli Methi Paneer was "alright but not very exciting and the sauce lacked depth" according to my vegetarian comrade. A main course with soft drink came to £12 each.

DrHyde's verdict: This is the sort of place that is perfectly acceptable if you've already had a skinful, but not worth going out of your way for, and there are much better curry houses in the area.

Accessibility: The restaurant itself is all on one level, step-free from the street.