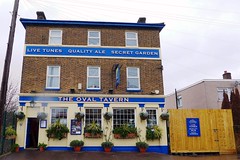 It's a single room inside, with four or five pillars breaking up the space. The ceiling is low, with exposed beams, and worn varnished floorboards are underfoot. Seating is a mix of low stools, mismatched upright chairs, and church pews. The bar runs along one wall of the room, with a mirrored and fairy-lit gantry above and a dart board to one side.

A wood-burning stove sits in a brick-built fireplace, beneath a heart-shaped mirror in an ornate wooden frame. Windows to front and back let in the light, though this doesn't penetrate too far into the dimly-lit centre of the room. Down some stairs out the back, there's a patio garden with picnic benches.

Kake visited on a Friday afternoon in October 2015. There were four other people in when I arrived around 4:15pm, and by 5:30pm there were about two dozen, some of them seemingly regulars. Music was playing, quite interesting and not too loud. They normally have five real ales on, but Friday is delivery day so they only had Robinson's Trooper (£1.75/half) and St Austell Tribute. The bartender was friendly and chatty, and extremely helpful to another customer who came in after being stranded due to a suspect package at East Croydon Station.

When bob visited on a Wednesday afternoon in August 2016, the real ales were Hepworth Prospect (£3.70/pint) and Hogs Back T.E.A. Lots of the tables were booked for the Wednesday evening quiz.

According to their website as of October 2015, food is served noon-9pm, possibly every day, and quiz night is Wednesday. They also host lots of live music events.

Child-friendliness: The ladies' toilet has a pull-down nappy change table and a potty (gents' not checked). According to their website as of August 2016, "well-behaved" children are welcome until 9pm.

Accessibility: A very small step to get in, more of a ridge. Toilets are down a staircase with a sturdy handrail on one side and a landing in the middle.