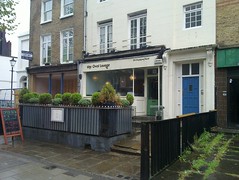 The Oval Lounge was a bar and cafe in Kennington. It has now closed. As of late 2018 the premises are occupied by a modern British restaurant called 24 The Oval.

It's fairly smart in decor, with a hardwood floor, pale wood tables, and mismatched wooden chairs. It also has outside seating at front and back.

bob and Martin visited on a Friday morning in August 2009, before a Test match at the Oval. There was only one spare table when we turned up, as quite a few had been reserved. Breakfast isn't normally served before 10am, but because of the cricket they were serving it early. We both had the full English breakfast (£7.45) photo and a pot of tea (£1.55). All the ingredients were of a good quality and competently cooked.

Kake visited on a Monday lunchtime in July 2013. Music was playing, not too loud. I was the only customer when I arrived just after opening time at noon, though one other person did turn up for lunch while I was there. I had the eggs benedict with spinach (£7) photo. The eggs were a bit undercooked, to the point where part of the white was still liquid. The hollandaise sauce was OK, though I'd have preferred a little more of it. The spinach and muffin were both fine.

Accessibility: Several steps to get in. Toilets are in the basement, down a straight flight of stairs with a rather wobbly handrail on one side.