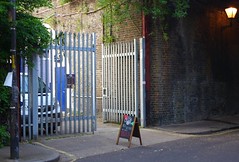 Orbit Beers Taproom was a craft brewer taproom in two railway arches in Walworth. According to Camberwell Online, it found itself on the wrong side of a planning dispute in late 2018, but it managed to hang on for another year before closing for good in December 2019. However, in January 2020 it announced that its beers would now be available at Sidecar Coffee a few arches along.

Craft brewer taproom in two railway arches in Walworth. It is open most Saturdays, generally from 12-6 but this varies and sometimes in the summer they are open until 10pm. They are on Fielding Street off Walworth Road near Oli Food Centre and Argos.

secretlondon went to visit one Saturday in August 2016 as I live nearby and felt I should go and have a look. I was worried it would be pretentious and hipstery but actually they were okay and friendly. It is a double arch under the railway line where they make their beer. They were selling four things on kegs and one (possibly two) on cask. They were each between £2.50-£3 for 330ml draught. I think they also sold bottles of their standard range. Music was playing on a record player — it was obscure but quite pleasant. They name their beers after music — Nico, Neu, Peel and others. As well as two of their normal range — Ivo and Nico, they had a saison (which had run out), an extra strong taproom beer and a bitter. I am pretty sure they are cash only.

Seating was on some picnic tables outside and crates scattered around. Sitting outside you can see the railway bridge complete with buddleia and trains passing overhead running between Elephant and Castle and Denmark Hill/Loughborough Junction. Many years ago the trains used to stop a street away at Walworth Road station.

Accessibility: There is step free access to the arch and a very small step to enter the toilet. The toilet is labeled as gender neutral.