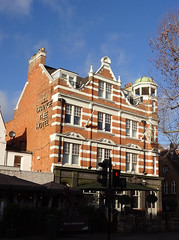 It's one of the pubs that people collect in on rugby days, since it's convenient for both the train station and the buses to the stadium, and hence gets very busy on those days. On sunny days, there are often a lot of people congregating out the front, where there is a fair bit of seating sheltered beneath large umbrellas/parasols, but there is often space inside.

Entry is into a wood panelled section with exposed floorboards and a mix of high and normal seating. Two fireplaces face each other across this section, apparently original but also apparently not in use. A column of checkerboard tiles leads back to the bar, and there's a dining area beyond. They also have a bookable function room in the basement.

We've visited several times now, generally on weekdays, and most recently in December 2017. In July 2008, there were three real ales on: Bombardier (£3.05/pint), Young's Special, and Young's Bitter. In December 2017, the choice had increased to five: Wimbledon Copper Leaf, Adnams Broadside, Young's Bitter, Young's Special, and Young's Winter Warmer (a pint of lime and soda was £2.20).

On our Wednesday afternoon visit in July 2008 there was music playing, though not too loud, sort of poprockjazzfunk, which although feeling a bit incongruous wasn't loud enough to be annoying. There were a few other customers in but it didn't start getting busy until 6pm approached, and the table service area to the rear remained empty. When Kake returned on a Thursday lunchtime in December 2017, there were a few other customers when I arrived shortly after noon, but plenty of choice for where to sit. Christmas pop music was playing, initially very quietly, but turned up quite loud around 12:30, possibly because there was a large group in having Christmas lunch.

Some time prior to July 2007, Martin had a very fine steak and ale pie (for about £10, so not the cheapest, but IMHO worth it). (Pie-fascists note: fully enclosed in good shortcrust pastry.)

In December 2017, Kake ordered from the brunch menu: a "sausage pattie" with cheddar and fried egg, served in a brioche bun (£6) photo. The sausage meat was good quality, and well browned, and the cheese was flavourful without being overwhelming. The egg was very good — runny yolk, whites properly set, and crispy round the edges.

Martin has been impressed with the helpfulness of the staff here — on one occasion allowing us to sit in the non-smoking section despite not ordering food (pre smoking ban, the table service food area was the only non-smoking area), and on another occasion loaning us umbrellas from the lost property while we walked round (nearby) Kew Gardens.

Accessibility: The approach to the entrance is cobbled (though with flat cobbles rather than rounded), but there's step-free access to the bar, seating areas, and RADAR-locked accessible toilet (with pull-down baby change). Other toilets are in the basement, down a flight of stairs.

Getting here: Come out of the station and turn right; it's on the other side of the road, conveniently just by a pedestrian crossing.