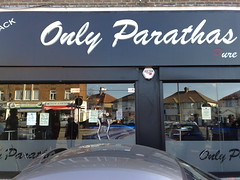 An Indian restaurant on Streatfield Road in Queensbury. It specialises in parathas, a type of Indian stuffed flatbread, and is 100% vegetarian.

There are many parathas on offer, all at about the £4 or £4.50 mark (as of April 2009). They all come on a metal tray with chhole (chickpeas in a spiced sauce), maa-ki-daal (black lentils cooked in a rich tomato/cream/butter sauce), raita, and pickle. Some South Indian food is also on offer, such as dosas, which come with sumbhar (thin spiced vegetable stew) and fresh coconut chutney. The menu also includes some Chinese food as well as pizza. secretlondon was informed that Indian Chinese food is spicier than the English variety.

secretlondon visited for a Twitter meet on a Saturday in April 2009. I missed out on the starters, but had a muli (radish) and paneer paratha (£4.50) photo followed by a cheese dosa (£4.25) photo (since I was still hungry after the paratha), and finished off with two pieces of ras malai (£2.75) photo for dessert. The food was fun but I didn't find it particularly filling.

The selection of non-alchoholic drinks was extensive and interesting; I tried the mango lassi (£2.95) and the sweetened lime juice (£2.75) photo. They are also licenced, but no-one sampled the booze on this visit.

There was a television round the corner from where we were sitting, playing music from Bollywood movies. You can hear it from elsewhere in the restaurant, but if you want to see it you need to make sure you're in the right part of the restaurant.

Accessibility: One small step to enter but no further steps inside, including to the toilets.

Comment added by loveFood: They do the best Pav Bhaji I've known!!! A tad bit spicy but I'd not change that a bit.