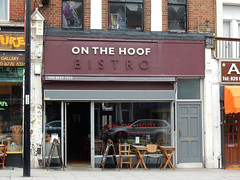 Small, friendly cafe/restaurant in Sydenham, opened in 2014. The owners also run the small coffee kiosk inside Sydenham Station, a few minutes' walk away. The building used to be an optician's for many years; as a nod to this, the bill arrives in a glasses case.

The decor consists of simple reclaimed wooden tables/desks and mismatched chairs, with one wall of framed mirrors and the other of art (for sale at around £100-£200). The front window meanwhile gives a good view of local passers-by. During the week the menu features soups, salads and sandwiches as well as more hearty lasagne/casserole dishes, while on Sunday lunchtimes it's just roast dinners.

Kat and Rick visited for Sunday lunch in March 2015. The Sunday menu featured beef, pork, chicken and veggie roasts (all £12.50 except the veggie, which was £10.50). We both opted for the pork and each received an enormous pile of food: two huge slices of juicy roast pork, spiced apple sauce, two roast potatoes, sweet potato mash, glazed carrots, two Yorkshire puddings, stuffing (delicious). Also included in the price was a side dish of three big chunks of cauliflower cheese, which Rick said was surprisingly good (Kat declined hers beforehand, as cauliflower is a horrific vegetable), and a dish of extra crackling (excellently crisp, not too teeth-breaking). We were feeling almost full when our server brought us out two extra Yorkshire puddings that were apparently going spare. We left feeling very satisfied — my only criticism would be that the cutlery was not quite sharp enough to attack the meat efficiently.

A pot of tea was £2.20, and a bottle of Roscoe's Amber Ale (which arrived pre-poured in a glass) was £4. Service was very attentive, the owner happily came and showed me the beer bottle afterwards as I'd forgotten what it was called and wanted to make a note of it.

Rowley Birkin QC's visit on a Friday in August 2019: arriving just after 9am I was told (unprompted) that there wouldn't be any food till 9.30. I had a pastry for the time being, but trying later to get some food, I was this time told there wouldn't be proper food till lunchtime, so presumably something had happened to their cook. There were just a few other customers at first, later building to about 15. Three or four others were also working on laptops: there's decent WiFi, some sockets and even the two-person tables are big enough to allow one person to work comfortably with a laptop and notepad/documents beside it.

Kat's verdict: One of the best Sunday roasts I've had in a while, and much better value for money than your standard pub roast. I'll definitely return.

Accessibility: a step to get in, otherwise level. Some of the tables and chairs are very close together and might be awkward to navigate around.

Child friendliness: At least one adult with children was present when we visited in August 2019. There are some high chairs (though lacking trays). There's a fold-down baby changing tray in the toilet.